In a previous post, “A Friendly Word from Home,” I shared a cheeky letter from a boy back home in Cincinnati, Werner Silberschmid, to a buddy in Navy boot camp at Great Lakes during World War II, Julius “Jules” Frank.

Part of the research I do for each letter posted here involves trying to find out as much as I can about the letter writer, recipient, and anyone or anything of note mentioned in the letter. Most of the writers and recipients were regular folk, so there’s not much said about them in newspaper or genealogical searches besides announcements of birth, marriage, military service, and death.

One of those routine searches turned up the sad news that this jovial fellow passed away very early in life, at the young age of 19. More digging revealed Werner’s death certificate, which indicated that he passed from a brain tumor he endured for three years.

It also turns out that Werner made good on his promise to join the Navy. He was an Apprentice Seaman in the Naval Reserve at the Navy Pier in Chicago. He was honorably discharged from the service on June 28, 1945.

His death certificate also gives some other important details about his life: he was not married. He was a shoe salesman. He lived in his community for 10 years. He was born in Germany, as were his parents. 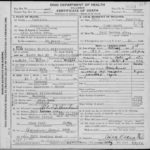 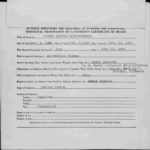