Dear Jule:–
Boy! it was really swell to get your card. I knew that it was from you, because right away the sailor represented you. (Back view, of course!) How is the Navy? Really fellow, I wish I were in your boots, but Dad tells me that I still have to wait two years. Yesterday we had a meeting at the Plaza. Nothing new! Rafalo is in Texas, and Les is in Georgia with some “Ack-Ack” division. I’m home from school to-day with a little cold, but mom says I’ll be OK to go back tomorrow, Dammit!

How are the femmes? You won’t need Esther anymore, since a sailor has a girl in every port, and a port in every girl. (Woo!) Butter is rationed, but we still drew the fat. (P.U.) You know, if you can’t make both ends meet, you can always make one vegetables! (Ha-ha.) The Reds are training, but I don’t think any body will care much for baseball this year. Speaking of baseball, I’m going to try out for the A.Z.A. team next Sunday. If I can get enough dough, ($1.50, specifically,) I’ll take a date to the 490-Vivalets affair. Eve is still as small and hot as ever. Yesterday I bowled 132 and 78 at Snapps for a grand average of 105. I’ll make a team yet. But really Jule, the only thing athletic about me are my feet, I’ve got Athletes-Feet! Is Laibson or any other A.Z.A. boys with you?

Excuse the hyrogliphics [sic], but I got a hell of a time writing in bed. Write if you get a chance,

P.S. My folks, although not knowing you send their best regards. WS

I was initially drawn to this letter by the handwriting on the envelope. It was neat, tidy, and distinctively masculine. I had a stack of letters that had been sent to a Julius Frank–but none other was addressed to “Jules.”

The letter was written on three pages of personalized stationery. Werner Silberschmid must have been a friend of Jules Frank’s, perhaps from Hughes High School in the Avondale neighborhood of Cincinnati, OH. They lived just about a mile from each other, Werner on Larona Ave. and Jules on Carplin Place. The Wikipedia article on Avondale states that the neighborhood was majority Jewish until after WW2, when it became a destination for black residents. Violent race riots happened there in 1967 and 1968. Here is a great read on the history of the area from the Avondale Community Council.

Sadly, I learned Werner passed away in 1947, at just 19 years old. It appears he was the only son of Robert Silberschmid and Else Silberschmid.

So… why did Werner pass away at such a young age?

What happened to Jules Frank? I have a letter from his mother, written in 1945, and addressed to Jules at a Naval Hospital in Newport, Rhode Island. It seems to insinuate that Jules contracted measles. But that’s another letter, for another post… 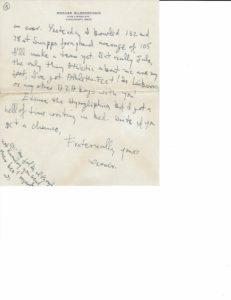 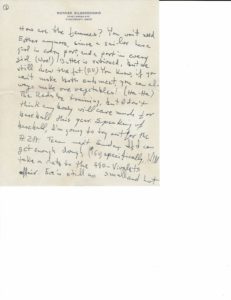 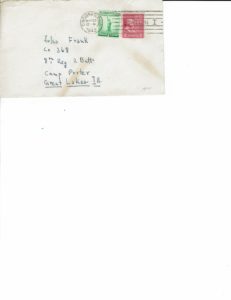