A Letter from Julius Frank’s mother to Julius in the Navy Hospital at Newport, Rhode Island

[Ed.’s note: This letter is not dated, and the postmark is illegible, with only the year of “1945” visible.]

We are sure sorry to hear about you and pray to God you are better by now. You have to be careful of your eyes. because sometimes it affects the eyes, + try to drink fruit juices as much as you can. Yes Jule you had alot of trouble with your ears they were lanced 3 or 4 times. One time 3 months at a time you had high fever + you had the measles very bad when you was a child. I can’t understand that you got them again I bet it isn’t that now tell me the truth is it or is it not. Well Mel is home + he don’t look or feel so good. Well Jule now don’t be in a rush about getting out of there. Try + be there as long as you can as it leaves you in a very weakened condition + then you are acceptable to any sickness. How + when did you get it. See that you don’t get a cold. It’s rainy + damp here. I just go through with my washing. We got 3 letters at one time from you. I also a letter from Chaplain Richardson. Well honey I’ll write a letter to-night no 10 checks came. At any time, listen Jule can I send you a box to the Hospital let me know immediately. Bob’s picture with some other boy’s picture was in the paper he gets from the A.Z.A. Yes I’ll save the paper so you can see it. Well honey we were sure expecting you Sat. Pop went to Winter Place in the morning + he + I went in the evening + no Jule. Well dearie just keep warm + not catch cold. Watch yourself + drink a lot of liquids. God take care of you + please rite us all particular us so honey I’ll say So long have Pop + Bob say hello + I send my very special love to you So keep your chin up. Love from me to you.

[Ed.’s note: Bob is Robert, Julius’s brother, and Pop is his father]

A mother never stops worrying about her children, and it’s very apparent in this letter from Julius’s mother, Fannie, to her son in a Navy hospital in Newport, R.I. Apparently, she believed her son to have succumbed to another bout of measles, which seems extraordinarily unlikely. But, when someone says measles, especially in 1945, it’s not entirely clear which variety is meant: Rubeola (known as “measles”) or rubella (known as “German measles”). They are each caused by a different virus, and both develop the tell-tale red rash. But, German measles is also known as “three-day measles” as its rash duration is typically much shorter than rubeola, which lasts about seven days.

The rubeola vaccine wasn’t developed until 1963, so Julius would not have received it. He would have been in close quarters with his fellow sailors, a perfect opportunity for the virus to be transmitted. It’s just one of the many diseases endemic to the U.S. troops during World War 2.

The A.Z.A. is a Jewish youth fraternal organization. I’ve seen it mentioned in other letters, such as the letter from Werner Silberschmid, and others that I haven’t yet posted. It’s clear that this was an important part of Julius’s adolescence.

My questions from this letter:

The last line, “Be careful,” breaks my heart. 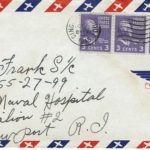 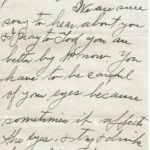 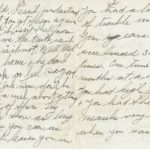 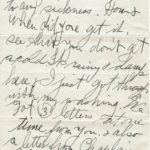 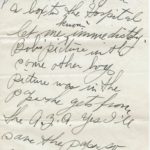 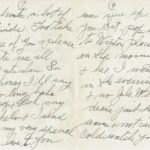 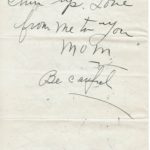