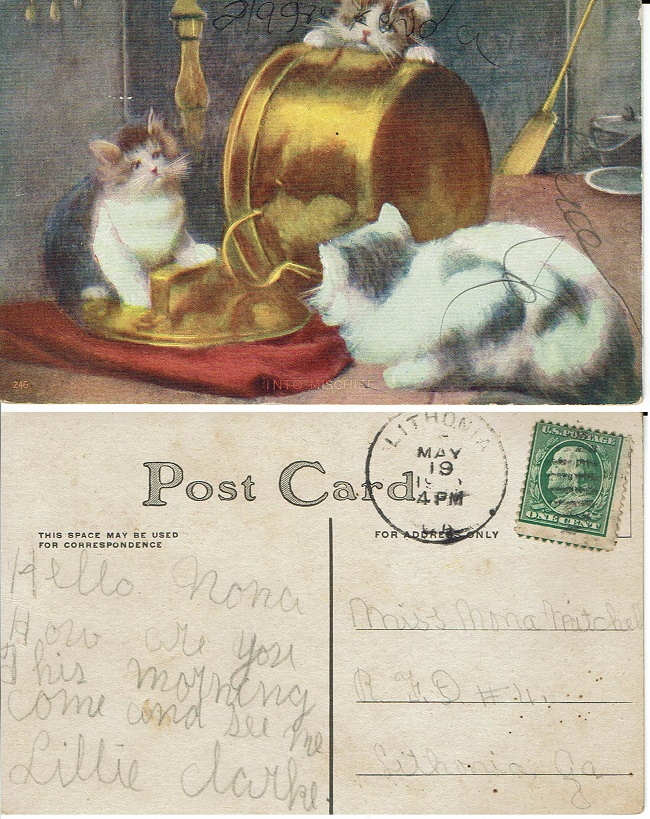 This looks like a postcard from a little girl (Lillie Clarke) of Lithonia, GA to a Miss Nona Mitchel, also in Lithonia. Found in Monroe, GA.

Unfortunately, the postmark is illegible. The year is not visible. So, to narrow down when this might have been sent, I looked to see in which years postage for a postcard was just a penny.

Another clue that could reveal a timeframe for this postcard would be when RFD, or Rural Free Delivery, was active. It was a Georgia Congressman, Thomas Watson, who put RFD in motion. I couldn’t find exactly when RFD was in service in Lithonia, but it went into effect in the late 1890s. Lithonia was established in 1856 as a farming community. Today, it is considered a suburb of Atlanta, conveniently located right on I-20.

I can’t find much more information on these two people, Lillie Clarke and Nona Mitchel. Perhaps Nona Mitchel was a friend of Lillie, or a family member? My own daughter, age 9, wrote a postcard just like this to her auntie a few towns over a few months ago, which is one of the reasons I found this card so endearing. Now, my daughter can text her auntie, too, but back when Lillie wanted to get a message to Nona, she could either write or call (probably).

If you know anything of this Lithonia family, please comment.

Back in 1937, a young woman from Decatur, Georgia sought employment as a teacher. Frances Treadwell was her name, and she earned a normal (teacher’s college) diploma from the Georgia State College for Women after graduating from Decatur Girls’ High School in the 1930s.

I learned of Miss Treadwell after finding an old, tattered envelope in a pile at a a Covington, Georgia antique store. I couldn’t resist peeking inside, and when I saw the yellowed pages folded up inside, I gladly paid the $9 asking price for this treasure.

Inside the envelope postmarked April 27, 1939 was an old “Abstract of Qualifications,” typewritten but with some handwritten notes, and letters of recommendation from former instructors. It looked like a job seeker’s packet, like something Miss Treadwell would have tucked into her pocketbook after fastening her shoe buttons and donning her gloves before her interview.

As I read the pages, a few things stood out to me.

She is very attractive in appearance and manner and is cooperative in attitude. She is somewhat timid, but because of many other superior qualities I think she will make a good teacher.
– Euri Belle Bolton

(Interesting side note: It turns out that Euri Belle Bolton was a well-known educator in Georgia, with a varied career teaching all ages.)

My, how times change. Today, Miss Treadwell’s resume would be (generally) completely unprofessional for including all of the detail about her appearance–and religion. Unless she was going for a performance or modeling job, or a church job, that stuff just wouldn’t matter. I wonder if the complexion, hair, and eyes attributes were sneaky ways to ascertain if Miss Treadwell was white? Remember, this was in the Deep South in the 1930s, and institutional racism may not have been the law of the land, but it was still very much alive.

I’m also genuinely surprised at the tone of some of her “recommendations.” One writer admits she has not really even met Miss Treadwell, stating she is “attractive” and that “Her father’s experience as a teacher should be valuable to her in understanding her chosen profession.” And another writer, Ms. Bolton from above, states that Miss Treadwell is “somewhat timid” which I find to be an odd sentiment to include in a letter of recommendation. Maybe these letters were just fulfilling boxes that had to be ticked, and the content didn’t matter much.

I wish the letter writers would have focused on Miss Treadwell’s accomplishments, expanding more upon the American Legion Medal she won–voted on in secret by the entire faculty of her high school, it’s kind of a big deal.

I was drawn to this case, too, once I learned Miss Treadwell was from Decatur. It made me wonder why she did not attend Agnes Scott College, a women’s college located in Decatur. I think it may have been because she was Methodist, and Agnes Scott is a Presbyterian college.

It was a happy life for Miss Treadwell, it seems, as she did land a teaching job in Cave Spring, Georgia, and shortly thereafter married and moved back to Decatur. She passed away at age 95 on December 26, 2012. Click here to view her obituary.

If you are kin to Ms. Treadwell, and would like to have these letters, please get in touch.