A Postcard from Sunny California 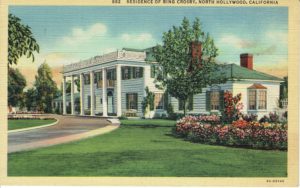 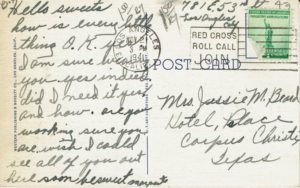 Hello sweets
how is every little thing O.K. yes
I am sure because you yes indeed.
did I need it yes, and how. are you working sure you are. wish I could see all of you out here soon.
be sweet Margaret

This postcard, postmarked November 2, 1941 in Los Angeles, was sent to a Mrs. Jessie Beard in Corpus Christi, Texas, from someone who I think was called Margaret–I can’t tell. (Can you?)

The house at 781 E. 53rd Street, Los Angeles, is located in between the South Park and Central Alameda neighborhoods, and is right down the street from the Natural History Museum and USC. (South Central, yo.) Looking at Google Maps, the house is obscured by a huge bush, and the houses are all small stucco homes and duplexes, built from the 1900s to the 1930s, on narrow city lots.

The “Hotel, Palace” in Corpus Christi is listed in the 1941 City Directory under “Hotels”. It is now the home of a marketing company and shows a two-story building in a business district. Newspaper ads of the time show a beauty shop occupied 423 Schatzel, so 423 1/2 Schatzel was the upstairs Palace Hotel, just a few blocks away from the Gulf of Mexico.

And now… Bing Crosby’s home, the subject of the postcard. In 1941, Bing was in the middle of his very successful movie and singing career. And he was in very good company–the neighborhood, now called Toluca Lake, was a popular place for the stars to live. His neighbors included Bob Hope, Bette Davis, and other big names.

The San Fernando Valley Blog has an excellent write-up on the history of Bing’s modest home. Spoiler alert: It burned down in 1943, was rebuilt, and was the residence of several other notable stars.

If anyone can decipher what the stream-of-consciousness note on this postcard means, let me know.