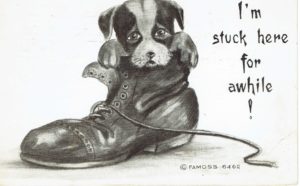 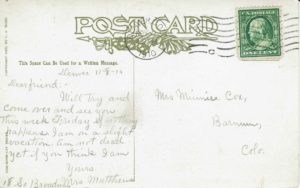 Will try and come over and see you this week Friday if nothing happens. I am on a slight vacation. Am not dead yet if you think I am

“Am not dead yet if you think I am.” LOL. I text that to my friends at least once a week. 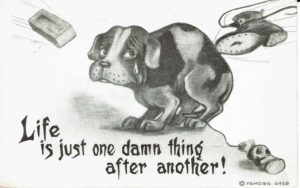 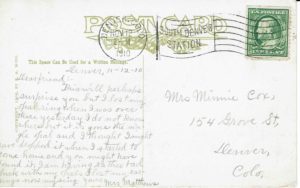 This will perhaps surprise you but I lost my opal ring when I was over there yesterday I do not know where but it is gone the single opal and I thought I might have dropped it when I started to come home and you might have found it. I am having rather bad luck with my opals I lost my earrings now my ring.

Poor Mrs. Matthews! She has a bad habit of losing her jewelry. I imagine her ring to look like this, a delicate yet substantial Edwardian piece in yellow gold. Maybe her earrings were similar to these opal and diamond baubles.

The first postcard is addressed to a Mrs. Minnie Cox in Barnum, Colorado. Barnum is a district of Denver that was developed by none other than American circus impresario Phineas T. Barnum. The Denver Public Library has a nice write up about the neighborhood here.

And finally… the postcard art. F A Moss was a stationery publisher in the early 1900s. One of the cards is marked “Dog-Gone-Cat Series,” and they each bear a copyright of 1909. There are so many strange illustrations on postcards of this era. For instance, who in the world made the editorial decision to publish a picture of a dog being assailed by shoes and bricks? I’m hopeful that this is simply an exaggeration to support the “Life is just one damn thing after another” message on the card. By the way, just who made that sentiment first is up for debate. The Quote Investigator website has a good run-down of the candidates, including my front-runner, Mark Twain. Apparently, this was a very popular saying of the time.